This weekend, Chris Elam, Kristin Sloan, and myself are atÂ Dance USA’s Winter Forum. Together, we’re leading a workshop for dance organizations, helping them develop strategies for video.Â

To open Â the conference,Â Jerry YoshitomiÂ led two workshops. The first workshop dealt with developing a plan for audience research.Â Both workshops were very informative.Â This post will cover the second workshop which focusedÂ onÂ the question of broadening, deepening and diversifying your audience. 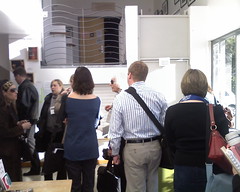 DeepeningÂ involves communicating with your existing base in new ways.

BroadeningÂ entails reaching new audience members who are similar to your current audience.
DiversifyingÂ means developing an entirely new base.

Traditional marketing tells us that diversifying your audience, or reaching new customers, takes 6 times as many resources than broadening or deepening. Nevertheless, this is an invaluable opportunity.
BROADENING, DEEPENING, DIVERSIFYING
So you want to diversify your audience. How do you do this?Â Does your organization reflect the kind of diversity you are looking to view your work?
Jerry Yoshitomi mentioned U2’s Text Message Campaign.Â NexGen audiences are more likely to send text messages than communicate by email. U2 recently launched a txt2screen program, where fans could send text message to the projection screens during the concert. After the show, Bono sent a text message to all the fans, thanking them for coming to the show.
Green Day didÂ something similarÂ where fans could send picture messages during the concert, viewable by fans during the show. Â What would a dance performance look like if audience members could leave their phones on, putting them on vibrate? Â
If this number was publicized before the show, audiences around the world could send messages to the live audience without actually being there.Â
Golan Levin, a multimedia artist also created an interesting cell phone performance, calledÂ DialTone – A Cell Phone Symphony, where audience members left their phones on. During the performance, different sections of the audience received phone calls, generating a sea of rings.
Let us know if you have seen any other interesting methods that have successfully broadened, deepened, or diversified your audience!